Ghost stays in the 3.0 comfort zone once again, the beginning portion of the second set.  The segue from Piper has not been included.

Trey gets us started in the midst of some ambient sounds.  It takes a bit for Mike and Fish to come in.  When they do, Mike goes right for the fight bell.  It is officially on!

The pace is more upbeat that normal and packs a punch.  The solo section gets a nice clav throw down from Page.  When Mike comes in, things gets pretty sweet.  Fish throws down a cool beat towards the end to round things out.

The lead in is better, which should result in a better drop in.  Right?  The pause gets some Fishman, a couple fight bells…and….

What a F’ing mess.  Hey America, it is your birthday, hope you like crap! (Credit to Norm Macdonald’s Kenny G Christmas Joke).  That was so bad Trey laughs.  I am not laughing.  I just threw my headphones on the ground.    Phish is worse than burger king (Wesley Willis reference).

The jam gets a couple measures of sectioned off jamming before settling down quickly.  Mike is the first to work into the open space.  He lays down a smooth bass line and then Trey works some light soloing over top.

At the 4:57 mark, Trey breathes a cool lick into the jam and gives it some life.  That is a sweet lick and gets me moving.  I am also 3 IPAs in, while writing this review.  I had some problems with my server so that meant extra time to drink!

Mike works perfectly with the lick Trey has created.  When Trey comes off it at the 5:30 mark, Mike carries it forward.  Trey then gets some soloing in before deciding to revisit that lick.

It gets more funky from there and this finds a nice dancing groove!

Mike lays it down and Trey provides the magic.  Page adds just enough with the piano.  Fish gives the jam plenty of steam, dropping fills in all the right places.

Around the 6:37 mark, Trey starts to move his pitch up allowing the jam to move upwards.  His playing is well contained within the jam and Phish is 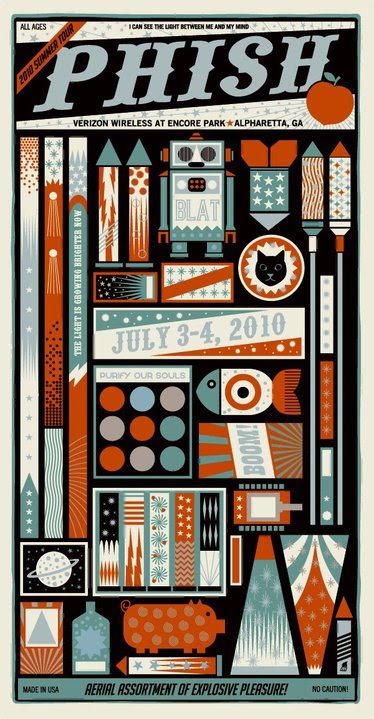 moving as a unit.

Fish drops a fill at 7:15, and then pushes the pace.  Time to go fellas!!!  With Fish providing the gasoline Trey starts to up his ante.

At 7:45, they bring it up, and Trey gives a quick touch of machine gun.  He then begins to let his guitar cry out beautifully.  Another upward move at 8:15.  Page drops in some nice melodies and then they go up yet again at 8:31.

Trey then gives a heavier dose of the machine gun.  Not a full fledged face melter but that was nice.  Fishman takes the reigns from there and keeps the tempo rocking.  At the 9:00 mark, Phish takes things up yet again….

Yeah I want to be at this party ^

Fish is a beast and just gives this peak a ton of power.  Fish and Trey are the clear stars for me.  And just as I say that….

Trey drops one of his worst licks ever at 9:33.  WTF was that?  It sounded
like his guitar broke…

Luckily Phish rebounds from it quickly and Trey comes back with a vengeance.  He plays one of his more bad ass licks at the 10:00 mark.  That lick is HOTTTTT!!  It is part rocking, part funky dance party.  The crowd eats it up and goes nuts.  The jam breaks down around it, and if he would have kept it up, things could have gotten incredible.

Another shorter version of Ghost that doesn’t break Type 2 ground but is well played.  It recovers nicely from a train wreck drop in and finds some interesting territory.  The opening jam and the peak are both solid.  That last 0:45 seconds are incredible but cut way too short.  Another solid offering, just nothing that is making any best of lists anytime soon.