Ghost is played after 12 shows (2nd Longest Gap) and is in the middle of a segue filled second set.  The segue and all of Jumpin’ Jack Flash and Saw It Again have been included.

After the end of Piper fades out, Trey begins the opening lick for Ghost.  The band follows shortly after, and Ghost takes shape quickly.  There is basically no intro jam as the vocals come right away.  An average pace for The solo section sees Trey yelling “I Saw It Again” at the 1:54 mark, adding a unique flavor.  A good balance between Page and Trey, and then Mike adds a ton of life.  When Mike enters, the last 10 seconds or so are rocking.

The lead in gets a little ugly near the end, but nothing extremely bad.  The pause gets another “I Saw It Again” quote.  Some Trey feedback during the pause and a decent drop in.

Not a bad composed section, with the “I Saw It Again” quotes making it fun.

Another “I Saw It Again” quote from Trey at the 3:33 mark.  Then Trey does some early soloing and switches tones.  As he switches tones the jam begins to break down.

Page contributes some laid back melodies that help guide the ship into the easy jam space.  Mike finds a nice powerful tone and chooses his notes carefully.  At 4:19, as the jam finds a jazzy groove, the crowd gives a nice bit of applause.

The band is working together nicely, and things are balanced right from the start.  I feel like I am in an old 1930’s jazz club that has been infiltrated by the funk police.  We are 91 Ghosts into this project, I am officially scrambling for good imagery.  That was not my best.

Both Page and Mike are on point and working exceptionally well together.  Trey adds just enough and this section finds a solid mark.  Nice and laid back, yet enough pizzazz to get me moving.

This gif has no place here except maybe that they nail the landing.  I just saw this over the weekend, and had to include it.

Fishman grabs the tempo and puts his foot on the gas.  This is not one of those 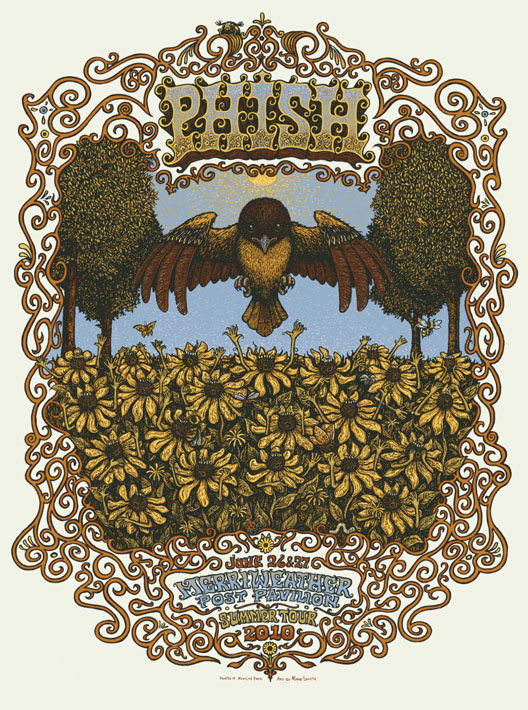 subtle changes from Fish.  He is supplying the fuel for this train ride.

The rest of the band adapts nicely and takes their time adjusting.  Trey actually lets his notes ring out a little longer.  His soloing is fantastic over top of Fish’s increased tempo.

This section is one part the easy groove from the previous section, one part uptempo rocking, and one part blissful.  That is three parts for all of you scoring at home.  It is all parts Phish.

I love Trey’s playing in this section.  The combination of the tone he has chosen, and the pace that he plays it at, works well for me.  It leads nicely but also leaves plenty of space for Page and Mike.  Both respond to the space well and the jam locks in nicely.

It is certainly not some of the type 2 magic we have seen in previous versions, but it is extremely well played.  They are locked in, it is upbeat, and I am moving.  A little switch up at the 6:55 mark from Fish, and Mike starts to interject some popping bubbles into this jam.

A mini machine gun from Trey at 7:22 gives this some extra heat.  Page finds himself stronger from that point.  He drops some quality melodies into this peak.

At 7:43, Trey repeats some notes adding some tension to this jam.  He comes away from it and then gets right back at it 7:54.  When Fish drops the fill after, a beautiful combination of Trey soaring, and Mike’s bubbles connect. This is real nice!!!

At 8:35, Trey starts to take things up one more time.  He comes away from the peak and begins an awesome segue into Jumpin’ Jack Flash.

Ghost plays an important part in a fun second set at Merriweather.  A set that gets the Saw It Again and Jumpin’ Jack Flash theme.  This is a short Ghost, just over nine minutes, doing its part for the greater good of the set.  It gives a nice jazzy groove to start and then ups the fun with a great peak.  It then yields to a great segue and the set moves wonderfully from there.  A solid Ghost, nothing out of the box.  Short, but well played.