Ten days after Phish’s last gig in Spain, they open up their 1997 U.S. Summer Tour at Virginia Beach.  This is Phish’s first gig at the Virginia Beach Amphitheater and they open the show with Ghost.  A great first set that you should check out, includes a great Bathtub Gin and some funny banter about the new songs they had just played.

Here is a quote summing up they way they opened with four US debut versions of songs from tweeter @stpalmisano… “As any young man seeing a show that opens with 4 new original songs….a person has the tendency to get lost in what they are hearing, and pay less attention to the particular notes of each one.  But instead, get swept away in the flow of what you are a part of…..thinking you know them all…only to have song after song unfold in a way that captivates you but at the same time makes you think “What?” in the best of ways” 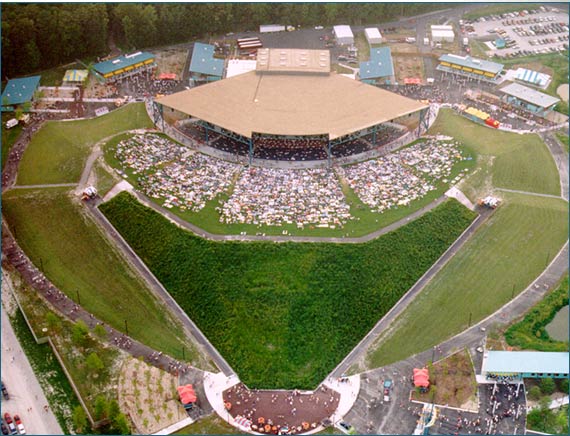 After the band fools around with the opening notes, Ghost starts at a pretty slow pace.  Page gets into a pretty funky solo that breathes some life into the intro.  Not a bad drop in, after a brief pause.  Nothing else really stands out, except the fact that it ends quickly and they move right into the jam.  The playful spirit from Europe is missing in this intro.  Very below average in my opinion.

After that short intro the jam starts at 3:18.  Trey starts to take the lead pretty quickly.  Page is playing very funky, with Mike infusing some funk as well.  By 4:45 Mike is really digging into the funk, he and Page have moved out in front.  Trey starts to add some funk riffs, and Fishman is providing the pace.

At 5:35 Trey moves to solo, he is met quickly with Page making some crazy synth sounds.  The crowd erupts to the unique sounds, while Trey continues to move forward.

At the 6:00 mark Page begins to groove with the synth sounds as Trey absolutely destroys a solo.  Mike is still doing a lot of slaps, and the band has found a very cool place.  At 6:40 Page moves to the piano.  Trey’s playing is in sync with everything going on around him.  He is not overplaying but instead feeling the groove.  While leading, he is also allowing for exploration from the other four counterparts.

By about 6:55 the band is really making some great music.  All four are really contributing to a fantastic groove.  Let your ear go and it moves back and forth from one band member to another.  Page is really filling in the gaps beautifully, definitely my type of jam!  At 8:05 you can hear the crowd respond.  At 8:15 Trey starts to play a lick a couple times and it looks like the jam is going to be broken down.  However, Trey plays a bunch of quick notes and Fishman responds to him.  They pick this jam back up and the crowd responds yet again.  At 9:34 Fishman plays a  quick fill, Trey rips a mean funk  lick and the jam starts to go a different way with more cheers from the crowd.  Great section!

At about 9:40 Trey continues the funk riffs and Gordon starts to lay down the backbone.  The jam breaks down and out comes a funky, jazzy groove.  The crowd responds immediately.  We take the spiraling staircase down into the basement of the funk mansion.

At about 10:45 Trey begins a lick and Gordon eventually follows for a measure.  Trey then takes it up a bit with Fishman right behind him.  11:18 and Page moves to the piano to add some rain drops into the groove.

11:48 and Trey starts to play with an ambient tone.  If you listen close enough you can hear some space loops going as well.  Mike and Fishman are really holding things down.  Page drops some great texture with his piano countering the dark ambient tone of Trey.  Fantastic example of Mike and Fish giving space to Trey and Page.  Fishman gets into it for a bit at the 13:20 mark.  He then gets right back into the groove.  Great stuff!  This groove is evil and filthy.  This is a bugout dance party and I’m all for it!

At 13:49 Trey and Fishman change things and move forwards.  Trey starts to move from the ambient tone to more of his classic tone.  Fishman begins to drive and this jam moves forward quickly.  14:04!!!!!!!!!!!!!! Trey lets the axe sing and the crowd erupts. THAT TONE HOLY DEAR MOTHER OF TREY.

Gordon continues to lay down a tremendous backdrop.  This sucker went from ambient dark groove to a full blown stupid nasty peak in like 30 seconds.  The ambiance created in the previous section really leads to the payoff in this section.

At 14:50 the band moves back towards the ambient sections and Page gets heavy into the clav.  15:20 Fishman pushes the tempo a bit more, while the other three get into the funk.  The jam slowly fades out after that.

Dear “Ghost”, Welcome to the USA!!!!!!  What a debut and way to announce yourself.  How could you not be a fan after that?  A ton of goodness here.  The 6:55-9:39 mark provides some great full band jamming.  Then the sick dark ambient groove section with an awesome peak.   Pretty unique “Ghost” which carries some of the Europe sounds and infuses them with the jamming potential of “Ghost”.   It’s not an all time version but man still an excellent version.

Tomorrow is Lakewood, Get ready! @KernelForbin has made a matrix (mix of SBD and AUD) that sounds fantastic.  Going to be a great day at The Daily Ghost!