After the outstanding version at Albany, Ghost takes a long break before being place in the heart of the New Years Eve show.  Towards the end of the second set another great version caps a great 2009 for Ghost.  The segue into No2 is included.

Another start from Trey, that is quickly followed by the rest of the band.  An upbeat pace lends itself to a nice opening jam.  Not overly crazy but enjoyable.

The solo section is extremely upbeat, Trey and Page go at it.  Mike drops in and the jam takes off nicely.  Great energy!  Certainly a good sign for the jam.

This lead is much better than the one at Albany.  The pause is a bit longer than normal… and then….

THANK YOU! Was that soooooo hard?  Nice and clean, and a total springboard for the jam.  Awesome stuff!  Go Team Phish! So you know how most Ghosts have those sectioned off measures to start? Not here.  Mike grabs a hold of this jam and puts a two handed vice grip around its balls.  Right at 3:46, this jam turns into the Mike Gordon show.  He creates a big angry gorilla tone, and it is over from there.

That tone is phenomenal and it shapes the entire Ghost.

There is no other way to describe this than awesome.  It is completely unique and totally my kind of jam.  Leave the light and fluffy stuff at the door.  This is angry, and yet it is funky.  I can’t help but strap on my helmet and get down.  If you could see me dancing right now, you would probably call 911.

Pure magic.  This is what I am looking for in my Ghosts.  I want something that instantly makes me remember it.  Something unique.  This angry gorilla jam is something I always remember.  It wants to eat everything in site and yet it still makes me want to get up dance!!!  The best part?  It took 20 seconds into the jam to find it.

Mike certainly forced everyone to take a supportive roll, and everyone did so with ease.  Both Trey and Page are providing easy long melodies for Mike to do whatever he wants with.  When the guy has the hot hand…you give him space to operate.

Mike’s Gorilla tone was so good he gets another gif.  Mike just said this to that section…

Trey starts to work more into this jam at about the 6:37 mark.  He is moving upwards and Fishman is starting to push the pace.  Page has moved to the piano and Mike continues his hunger.  You can feel the tone of the jam changing.  There is a peak coming in the future.

Tremendous playing by the band.  Mike doesn’t abandon the brilliant tone he has found.  Instead, he keeps it going and Trey builds on top of it.  The interplay between the two is top notch.  Trey is playing beautifully, every note seems to be an extension of what Mike is thinking.

Around the 7:57 mark, the Gorilla tone leaves the building.  Then Fish

ups the pace, as the jam breaks down.  The jam doesn’t do a full break down but instead begins to build toward a lighthearted peak.  A nice switch and one that pays dividends.

Around the 8:45 mark, on top of Fish and Mike’s beat, Trey and Page begin setting this jam on fire.  Each measure is a bit more rocking than the last.

At 9:27, Trey finds the lick to take us to the top of the mountain.  He works it over and over, and Page drops sweet melodies underneath him.  The evilness of the beginning jam section is washed way wish a blissful peaking section.

Just gorgeous soul cleansing stuff.  Hard to not be in a better place when you hear music like that.  What a way to ring in the new year!!!!!  I feel so light that I could do this…

Fish drops a fill at 10:27, which changes things up a bit.  Trey comes back in throwing down some power chords.  Page has taken the lead and drops some wondrous melodies.

At the 11:00 mark, things start to get a bit funky, and it almost sounds like 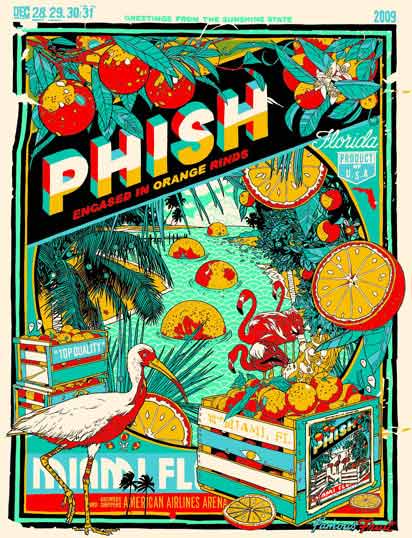 the end jam of Paradiso is going to happen.  Alas, it doesn’t, and they move back into a groovy jam.

At 11:17, Mike finds another BAD ASS tone and reminds everyone who the boss of this jam is.  Trey lays a high pitched blissful tone over top as Page interjects a bit of staccato into the end of this jam.

Things start to move downward and get super cool around the 12:20 mark.  Much applause form the crowd follows.  Then at 12:28, Trey teases Auld Lang Syne in that super cool tone.  Awesome, awesome, awesome.  Just when I thought things were getting a bit stale, they flip this outro jam on its head.

From there they go back into a funky spacey blissful jam.  Mike lays a super fast bass jam down, and the entire band clicks.  The outro is unique, and works perfectly.

Around the 13:52 mark, Trey lets out a whale call which starts the segue into No2.  So sick!  Out of an awesome Ghost, a huge bustout.  Phish you kick ass.

What a way to end a banner year for Ghost.  2009 was quality version after quality version.  The thing I like most about this version is that it is SOOO much more different than the others.  Where most were all about the peak, this Ghost does its best work early with Mike Gordon.  An incredibly awesome version, with a super cool outro and segue.  I love you Miami 2009.