Two nights after the face melting Ghost at Rochester, Ghost reappears in the second set at Albany.  This Ghost emerges out of a spacey “Punch You in the Eye” outro.  @KernelForbin has included the segue from Punch.  We decided to leave out the Mike’s Song.  You should check it out separately however, it is famous for the “Bring in the Dude”.  Also of note, this show had an opening band.  The opener was “J. Willis Pratt & We’re Bionic” and they played about 4-5 songs or so (thanks to @thePh1sher).

After a spacey intro from “Punch You in the Eye”…Ghost emerges.  Things get quiet for just a second and then Ghost drops at the 1:00 mark.  A very solid drop in and a bit more uptempo Ghost.  A super funky Page solo is complemented by Fish yelling in the background.  Great solo by Page.  At the 3:00 mark, we have our first big variation during the Ghost intro.  The jam goes completely silent other than the vocals and one note from Mike!  Awesome!  A longer that normal pause, and yet another nailed drop in!!!  Woo!!!  That was super cool.  The vocals are also very solid.  One of my favorite composed sections. When the jam starts up, Trey lets a note linger out in the depths of the Pepsi Arena.  Gordon does a bit of slapping, Fish a bit of filling, and Page gets crunchy on the clav.

At 4:23, the note from Trey dies out, and Fish hammers a fill.  Page and Mike soon take control of the jam.  Mike has a super deep bass sound, and really grabs hold of this jam.  For the first part of this jam Page is right with Mike, but fades into more a supportive role.  This is Mike’s Groove.  Fish also begins to lock things down.

At 5:45 Fish starts to pick things up.  He pushes the beat forward and gets a great response from Trey at 5:57.  Trey finds a little space and settles in beautifully.  Beautiful blend of Phish in this section.

At 6:00 Trey plays a really cool riff that Page blends his piano around perfectly.  6:00-7:30 is top notch Phish.  Pure type II, improvisational music. Nothing like any other Ghost we have heard.  A+!

At 6:24 Fish runs it up and Trey drops in with a weird note.  The band responds with Gordon and Fish taking things darker.  Mike’s tone gets darker, scarier, and more powerful.  His sound is what I imagine the Big Black Furry Creature From Mars looks like.  That sound is bad ass.  At 6:33 Mike’s bass is hungry and starts eating everything in sight.  The jam starts to section off around the scary, hungry bass of Mike Gordon.  Run away! Run as fast as you can!  That bass is coming for you!

At 7:30, Trey starts to throw some effects at the monster bass.  Fishman is providing the step by step beat of me running for cover.  He is clearly pushing this jam.  As Trey, and later Page, become more pronounced in this section Mike’s scary bass becomes a bit softer.

Solid balance from all four band members here.  I move back and forth between each band member.  Everyone is contributing equally, while really playing well in there own space.

At 9:25 Page starts to play a melody on piano.  Trey quickly latches on and starts to use it as the melody to build the jam.  As Trey works his way up the ladder, Page start to fill in the gaps around Trey’s work.  Very cool interchange.  Page starts it, Trey grabs on, then Page works around Trey.  Yeah, Phish is amazing!

At 9:55 Trey and Fish are really picking things up.  Trey has a great tone working, and Page is providing the absolute perfect contrast.  At times he drives the opposite direction from Trey.  Other times, he helps build the jam. Gordon meanwhile, provides the backbone for this Ghost.  His bass line is the support for the climbing that Trey is doing.

A huge amount of tension is built early and then at 12:40 Trey builds it even more.  He starts to play faster and and at a higher pitch.  It is coming….you can feel it.  The hairs all over your body are tingling….You know it is coming!…When? When?….Do it Phish….DO IT!!!

At 13:25 Fish starts it, and Trey finishes it.  Big Red is in the house and rips 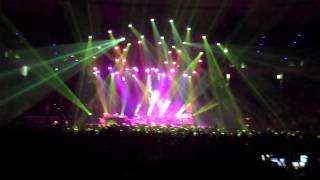 Trey begins to machine gun the tension and the crowd goes ape shit!!!  Then at 14:30 the tension releases with some Fishman led action.  Trey and Fish then rip the end of this peak..

At 14:59 Trey starts to drive the jam down into the outro.  The rage fades into almost nothing and Trey sends some loops searching into the abyss. Some cool exploratory sounds end this Ghost before a monster Mike’s Song starts.

This is another Ghost that I think is very underrated.  Each section is executed very well.  A great intro, a great Mike bass monster groove, a good build, and ripping peak.  This Ghost has tremendous flow.  When I listen to it, I feel like it is five minutes long.  Albany Ghosts….lets just say they tend to be damn good!