After some beginning set noodling, some Trey loops arrive and receive a nice reaction.  The loops are very soft compared to the other Ghost loops we have seen in Fall ’98.  After Mike’s bass line intro, Trey starts to groove a bit and this intro becomes unique.  A cool addition to the intro from Trey.   The vocals some in around the 2:00 mark, and they care controlled and confident.

The solo section is a nice balance of continuing the groove, and some sexy swank from Page and Mike.  The pause receives a massive Trey loop and the drop in is nailed!  Awesome, that sweet Trey loop, and nailing the drop in makes me one happy Ghost reviewer.

The jam begins with some spirited, sectioned off jamming.  You can hear the enthusiasm in the opening minute.  Just seems like they have a little something extra.

Once the jam starts to take shape, Trey takes the lead.  He plays some slower solos with Fish locking down the rhythm.  Page and Mike provide more of a backup role.

At 6:28, Trey starts to play a familiar lick.  This was a lick that was definitely in one of the previous Ghosts.  Again, if you remember, please leave it in the comments.  At about 6:48, Trey hangs on a couple notes and Page begins to  move to the piano.

There are some space sounds floating throughout this beginning jam section as well.  You hear Page dropping these crazy sounds in some interesting places.

This beginning jam does not do a whole lot for me.  I don’t feel very moved by anything that happens.  Page’s space sounds are certainly cool, but overall a disappointing start for me.

Trey continues to build louder and louder and Fish pushes things faster and faster.  Awesome tension build!  I felt like they were going to move out of it much quicker than they actually did.

Fish drops a couple of fills before Trey starts to rip into a solo.  Big Red comes out blazing and wastes no time stealing the show.

At 9:47 Trey starts to play a super cool rhythm that he repeats for a while.  Love this part.  I think it may be a tease but I am unable to place it.

At 10:15 Trey creates more tension and builds things up a bit stronger. 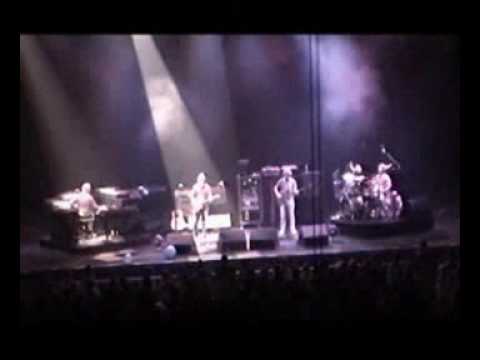 Fish comes right with him, responding with a couple of fills.  This is some monster playing from Fish.  He usually does kick some major ass in these peak sections.

So how about Mike and Page?  Well Mike especially, is his usual awesome self of balancing between rhythm and filling in any gaps that Trey leaves for him.  Page’s role seems to be, working his ass off to build this peak even stronger.

The jam feels like it is about to falter and start to work it’s way down around the 10:35 mark.  It seems like it is starting to loose some steam.  Quite the contrary happens.  Trey forces this sucker stronger.

Where many times Fish pushes these jams to the extreme, it is all Trey here.  At 11:09 he tears into a powerful lick that forces Fish to move with him.  Fish finds him and proceeds to destroy his drum kit, allowing for Trey to pull the trigger a bit at 11:25.  This is much to the delight of some face melted souls.  Trey quickly moves back to the power chord and builds it up more.  Ass kicking section!  Now this is the stuff that sends the chills down my spine.  For what the beginning jam section lacked, this peak section makes up for it.  The band is really on FIRE!

At 11:42, Trey moves away from the power lick for good and starts to solo even harder than before.  Trey gives a touch of machine gun at 12:05 and then continues to dominate.  Some more machine gun rips over the crowd at 12:28.  Fish picks it up from there.  Fish and Trey start to obliterate everything in their path.

Starting at about 12:45 Fishman becomes Neo in the Matrix.  He is somehow able to slow down time so that he can hit every drum on his kit at the same time.  The man is a machine in these sections.

A lot, lot, lot of notes are played by the former roommates.  They dominated that peak.  A damn good one.

The jam breaks down a bit and Trey starts to repeat a rhythm, with Fish slowing things down.  The jam starts to slow even more around the 14:45 mark.  Fish then switches things up and allows for anyone that wants, to step forward.  Page starts to get a bit funky, and Trey responds with some funk riffs.

The jam slows down even further at the 15:50 mark.  The slowed tempo and minimalist style lends itself for some space sounds.  Trey and Page man the controls to the alien space craft, while Mike creates the flight path.  The jam then fades out as Halley’s beings.

Not an awful Ghost by any stretch of the imagination but it has a tough time stacking up to some to the insanely awesome versions of Fall ’98.  The beginning jam section and outro did not do enough to impress me.  The peak section however is certainly some ass kicking Trey and Fish.  They were clearly the stars.  Solid Ghost.