Ghost moves back to the second set for the Miami appearance during the New Year’s run.  The end segue from Boogie on Reggae Woman and the segue into Free and the entire version have been included. After the funky ending jam of Boogie, Mike subtly interjects the bass line of Ghost.  It is just hinted at to start, but he does it beautifully.  Fish provides a fill and Trey starts to play his opening lick to Ghost.  It is a bit sloppy on the first go, but it ends up being a pretty cool segue.

Trey begins the vocals and Fishman shortly will jump on board.  The pace is a bit quicker than most.  The solo section gets some serious soloing from Trey, and then some spacey Page.  Mike throws down the funk and you get a wide variety of sounds.  The drop in from the end of the solo section is cool.

During the pause we see another dose of Trey, and then a weird drop in.  Most of the band comes in perfectly.  Then for some reason Trey wakes up and just blares a wild note.  That was certainly something. Page begins with some strong piano chords and Trey solos.  It seems like this is going to be a big groove party.  Instead, some huge deep notes from Mike and a slowed beat from Fish bring this jam down.

By 4:43, Fishman moves to soft cymbal work and it creates a bluesy landscape.  Only thing is, Mike brings bass bombs like power to his blues jam.  This jam is awesome from the start.  Soft notes from Page and Fish, countered by that monster bass from Mike.  Trey adds that bluesy tone and this is something special.

Mike’s bass line is almost a continuation of his Ghost theme.  I love these kind of jams.  When they move into these minimalist type jams, I feel like I am even more removed from reality that normal.  I am so far off on another planet, the Phish planet, and man is it an awesome place to be.

This is another excellent example of a balanced jam.  I can pick out everyone equally and each one of them makes me smile.  Trey is certainly locked in, creating fantastic melodies well within the construct of this jam.  Page is giving some great chords for Trey to cut through.  Mike’s bass might be the MVP, as each note he hits feels like it could blow the roof off.

I feel like I am partly in a BB King jam, John Coltrane jam, and Sly and the Family Stone jam.  Super cool melting pot jam.

Page comes back to the piano at the 7:07 mark and it starts to signal to the rest of the guys time to rock…

Fish and Mike spark this jam around the 7:15 mark and Trey answers with a furious lick.  Fishman picks up the bass and then Mike quickly answers with power.  Fish then settles into a power beat at 7:32.  HELL YES Fish! I can’t do anything but this with Fishman’s beat…

This build is really moving and I am dancing up a storm.  Page drops some super cool chords at 7:40.  Phish is officially locked it.  Close the blinds, crank the volume, and clear some dance space.  Also, cancel any meetings or calls you might get.  This is music that moves the soul.

No messing around in this Ghost, only one direction to move.  Upward!  Well, hold that thought, for JUST a second.  Just as things look like they might go into a furious peak, the band takes it to down.  We have seen this before, with great success in Ghost.  Take the jam down for just a bit, so it crushes even harder….

As the jam heads downward around the 8:18 mark, Page continues his fantastic playing.  Trey repeats notes and helps to build some tension.  Mike finds the perfect tone to move around.

At 9:10, Page finds a particularly awesome set of chords and again is a big part of moving into the next section…

Trey jumps on those Page chords, grabs a beautiful tone and starts running.  He is part machine gun, part jazz rocker, part funk master.  Page works underneath him with incredible skill yet again.

Things drop down around the 9:38 mark as Trey builds some tension with a repeating lick.  He releases it for a second and then does it again shortly after.  Then……

Right at the 9:59 mark, Fish says “FUCK THIS” unloads a monster fill and this baby explodes.  Trey jumps on that fill and fires a shot that blows up the Death Star.  “Great shot kid that was one in a million!”  This is one of my favorite sections of any Ghost!  With Trey’s power lick and Fishman pretending his drums are a cheating ex-wife, this baby brings the heat!!!

I love when jams have a defining moment and the 10:00 mark of this Ghost is certainly one.  Mike is no slouch as he really lays the funk down.  Page holding organ notes provides that last piece to the puzzle.

Trey finds another cool tone at 10:45, and even though he doesn’t melt your face it keeps me rocking just as hard.  His notes are calculated and precise.  Each note is held the perfect length, and his tone fits with this jam extraordinarily well.  HIGH marks for Trey.  (No pun intended)

As Fish rocks his dress off, another one of my favorite things happens.  As Mike finds a familiar bass line, he helps steer the Phish ship.  At 11:49, Trey reprises the power lick he started at the 10:00 mark.  This was the lick that started that madness. The jams moves down around the reprized lick and shows the brilliance of this band.

They unleashed fire, took it one direction, came back to the fire, and now jam into a different direction.  #ILovePhish

As Page starts to back away, Trey starts to play the power lick with less intensity.  The jam slows down a bit and starts to switch directions.

Fish slows the beat down, and after a couple of big licks from Mike things start to fade into space.  The jam works its way down into a spacey groove.

At 13:14 Trey picks up his gritty space laser tone and begins to fire off some 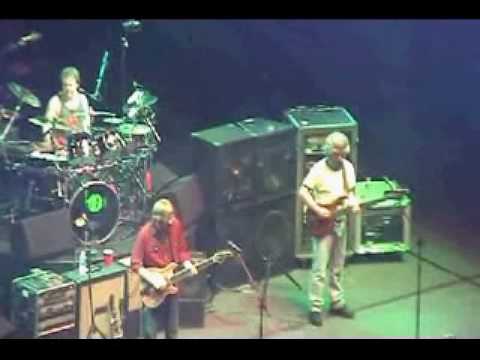 rounds.  Mike jumps back into the picture and provides some heavy backbone.  It starts to sound like this jam might explode yet again!  Instead, it stays in this Trey rockstar mode.  Trey solos with intensity as Page holds down organ notes.

Trey provides some great melodies until about the 14:00 mark.  Things start to fade into space a bit, even though Fish is crushing the beat.  It certainly sounds like Fishman was ready to crush another section.  Instead, Trey starts to play the opening notes to Free at the 14:43 mark.  Fish lets off the gas, and into Free we go…

A great version of Free that is highlighted by the Mike and Trey duel.

The most common criticism of 2.0 is the meandering spaced out nowhere jams, along with sloppy playing.  You will find none of that here.  The jam breaks into an awesome blues groove and then lights the world on fire.  Only a little over 12 minutes long, this Ghost brings it and brings it hard.  I love it.   10:00-12:30 is a pure heater.