The second show of Phish’s return gets a second set Ghost.  Once again the song is given an important spot on the second day of the three night run.  Placed at the beginning of the second set.  The segue into Piper has not been included.

After the complete slop that was the Coventry Ghost intro almost 5 years earlier, there was only one direction to go.  Trey starts things off, Mike joins next, then Page, and finally Fish.  A swanky little jam breaks out, with some rough parts to it.  You can certainly tell they are feeling things out.

AHHHHH, Trey’s voice is back.  He is singing again!!!  He sounds refreshed and goes about his business.  The intro is played at a standard pace.

The solo section is a balanced attack from Page and Trey.  Mike joins in and things stay balanced.  Nothing special.

The pause is average with a touch of feedback from Trey.  The first drop in of this era?  Not the worst we have heard by any means.  It works OK just not as crisp as I would like it.  Still, it keeps the flow of this Ghost going.

No need for a train wreck gif today.

The jam begins with some sectioned off measures, and a slow beat from Fish.  The jam breaks down almost immediately.   Trey moves into an extremely dirty powerful tone.  Page compliments with some soft bluesy melodies on the piano.

Fish is playing an extremely minimalist beat, letting the others do the work.  Mike is doing much of the same.  This allows Trey and Page to establish themselves early on, which they do well.  As a result, a nice early groove breaks out.  At 4:42 Page finds a particularly nice melody.

As a result of that melody from Page, Trey switches tones at the 4:45 mark. He brings a lighter weapon to battle and it works beautifully.  Once he switches tones I perk right up.

Trey works the new tone in slowly and it meshes with Page’s piano wonderfully.  Mike and Fish continue to work behind the scenes giving them plenty of room.

I love the dirty gritty tone from Trey, that moves into the brighter happier tone later on.  Contrast is bliss.  As Trey works it in more and more, the band slowly changes directions.  Fish changes the beat at the 5:00 mark, and then Page starts to hold things down on his end.  Trey continues to add easy tones into the jam, as the band builds things subtly.

This section hangs around and waits for the next big movement to take it a different direction.  At 6:03, that will come from the Chairman.

Hardest game?  Temptation.  That game is nuts, I think I have seen like 5

people ever win it.  If I played I am taking the smaller prizes, it is just too hard to win.  My favorite game for people to loose at?  Cliffhanger.  I would scream at the TV for that mountain climber to go over the mountain.  I would then laugh at the person that lost.  The thing I love about Price is Right is that there are “rules” on how to win.  Bid 1 dollar, guess 5 during lucky 7, after the first number, etc.  Yet people go on that show and it seems like they couldn’t spell their name if it was written in front of them.  I am going to link a great youtube video.  This girl will blow your mind at ten chances.  It also is Bob Barker at his very best.  Take five minutes and watch.  Amazing.

Ok sorry, got a little excited there.  So this plinko infusion by Page is fantastic.  It is light, and adds so much texture to this jam.  It also gives plenty of space for Gordon, who comes blasting through at 6:28.  Trey pivots nicely and gives some great support.  Things are nice quickly, I am grooving and dancing.  Mike buddy, you sound good my man.

Around 7:05, Page moves back to the more classic clav sound.  Then 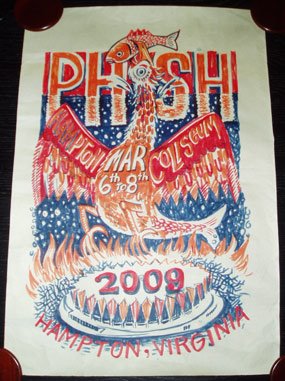 Mike fires some space lasers at the 7:24 mark.  High marks for the band coming out and playing a unique sounding Ghost in their first 3.0 try.  This is extremely unique and one that I am getting down to.

Fish starts to throw the beat off around 8:00, things are a little rough for a patch.  Fish is ready to change things and won’t take No for an answer.  This is a cool section that I really dig.  Now time to strap in.

As Fish starts to push things, the rest of the band begins to jump on board.     Page and Mike both drop some interesting melodies as this jam builds around Fish’s increased pace.  Fish takes it up another notch at the 8:48 mark.  Things then continue to build as Trey is stringing out notes, allowing for the rest of the band to build.

At 9:30, Trey plays a really blissful note that he holds.  It is the note that changes this section from good to great.  Then he repeats a lick as the band builds around him.  Mike is particularly grabbing my ear and is doing some fantastic work.  This is beautiful stuff.  This is so beautiful I feel like this just happened…

The band is incredibly locked in, and Trey’s tone just makes me lose any stress I had.  Gorgeous stuff.  Page and Fish provide incredible balance.  This is Grade A Phish.

After the incredible ride through the clouds, things continue to rock.  Fishman takes a hold and gets after it.  Trey works beautifully and Page is dropping notes at the perfect time.  The jam is half a continuation of the peak, and half moving its way down.

Trey has fully switched to moving things down around the 11:35 mark, as Fishman continues to keep things moving.  Page delivers some gorgeous chords at the 11:53 mark, and then Fish changes things up once again.  He moves heavily into the cymbals as Page plays some sweet melodies.  The jam then works down into nothing very quickly.  Page takes us to the very end of the jam.

Beautiful.  What a great section!!!

Just a great first offering for the new era.  The intro is certainly not crisp but there is some beauty in the jam.  Trey is calculated and precise in many spots.  He also peaks things beautifully.  Sober Trey makes an impact right away.  This is another great version that gets a lot done in less than 13 minutes.  Phish welcomes Ghost into 3.0 wonderfully. The story is still strong.  A nice groove, cool plinko, then a gorgeous peak.  Enough for me…