Ghost goes from set 2 closer at Hartford, to set 2 opener at Star Lake.  The segue into Jibboo has not been included.

Trey opens the second set with some loops, as Mike and Fish are ready to roll right away.  They enter nice and slowly, and give this a nice dirty pace.

The solo section continues the slow swanky pace.  Mike gives some nice funk at the end to spruce things up.  The pause gets an awesome Trey effect before an awesome drop in.  That was really nice!!!  Well done! Man when they nail the drop like that it, it just gets everything moving with so much authority.  I am pumped! 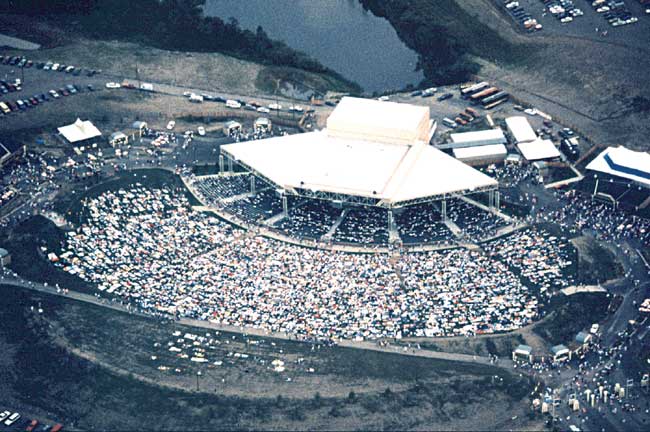 The jam immediately takes on an easy grooving pace.  Mike gets into it early again, and lays down a power groove.  Trey starts to solo lightly and finds a nice bluesy tone.  Fish is cymbal heavy and gives a nice beat for everyone to work with.  Around the 4:40 mark, Page starts to  move into the jam with his piano becoming stronger.

A nice balanced jam results.  My ear moves from one band member to the next as they are each doing a great job creating.  This is certainly a sway jam.  I am swaying from side to side with my eyes closed.  Page starts to force my ear his way around the 5:40 mark.  With the light sounds going around him, Page’s piano cuts through like a beautiful harp.  Blissful stuff, and extremely pleasing to me.

It is important (and sometimes I do a poor job) to understand why someone is catching your ear.  In this section, even though Page’s beautiful piano is bringing joy to my soul, he was put in a position to succeed.  The soft cymbal beat from Fish, the easy soloing from Trey, (with longer played notes), and the background bass provided by Mike, all let Page shine. They are like a great vegetable and potato, to a steak dinner.  The steak is the star but the vegetable and potato make it that much better.

Trey’s playing is almost as blissful as Page’s.  The interplay between them is truly outstanding.  Each note seems to flow into the other members.  The easy groove and balanced playing from Phish in this section screams Ghost jam.

Mike introduces a hungry dirty bass line at around the 7:30.  Page responds with some great chord work and Fish picks the tempo up a bit.  My sway is starting to become more like a dance.

At the 8:11 mark, Mike plays a super cool lick that gives this jam even more life.  I

am dancing, and people are cheering on the tape.  It feels like this jam is about to catch fire!  Here we….Nope.  The jam instead slows down a bit.  Fish changes the beat up and the band moves around a bit trying to find the next path.

The band kind of lurks around in this half build, half groove space.  Trey finds some cool sounds that he uses to give this some life.

I just saw a commercial for “Hansel and Gretel”.  You have to be kidding me with that crap.  That movie looks like it might be the second coming of “Coventry Glide”.  Wow that is garbage.

At 8:35, Trey finds a pretty cool lick that he starts to build around.  That lick  begins to carry into the next couple of minutes.  Page gives some organ accompaniment.  The jam sits down a bit as Trey’s lick becomes the main component of this section.

Fish adds some great playing off of Trey’s repeating.  He varies up the tempo and gets my nod for star of this section.

Trey introduces a higher pitch building lick at the 10:04 mark.  He then starts to solo at a much higher pace.  At the same time both Fish and Mike really start to get after it.  Mike especially finds a great lick to build momentum with in this jam.  A nice balanced build as Page makes his mark with some solid chord work.

Mike drops his tone down at the 11:38 mark, and finds a super awesome sound.  His bass sounds like it wants to eat everything in site.  That move by Mike, gives the end of this section some direction and leaves an opening for Trey…

Trey drops a NASTY funk link on top of Mike’s deep bass.  Commence pants getting ripped off.  This is hot.

This is my kind of party.  Bring the funk Trey….bring DA FUNK!

Fish works some killer funk beats as well and I am in full dance party mode.  Things were noodling around a bit before, but now I am ready to party.

Around the 12:53 mark, the jam actually breaks down underneath Trey a touch.  Trey marches on strong and won’t be denied.  Big Red is going to get this party going no matter what.

Page begins to move more towards the front at the 13:13 mark.  He starts slowly and then moves into some stronger chords.  Trey continues to work harder and harder and lighting this sucker on fire.  Page finds a group of chords at the 14:00 mark.  Trey just keeps going!!!!

You can feel the anticipation in every ounce of your body.  NOW THIS IS A BUILD.   Trey is laying it on thick, one brick at a time.  I can’t contain myself.  This is awesome…What is next!!!!

By about the 14:02 mark, this beast has some real power behind it.  Page is rising the tone of his chords upward with each measure.  Each time Trey repeats that lick I feel as if the world might explode.  Meanwhile, I am looking down at my feet, and they are going about 100 miles and hour.  Then…

At 14:57, the crowd can’t take it anymore.  They let out a huge cheer and the jam…just…keeps….building.  This is freaking sick!  Patience and power…two words I love to use during a Phish jam.

From that point forward as things keep kicking ass, the crowd just keeps cheering.  AUDs can really rock sometimes and this is a great example.  You can hear the crowd not being able to control themselves.  At the 16:00 mark they let out one of the biggest ROARS I have ever heard.

This crazy building party is unlike any other section we have heard.  Awesome creativity!  I love it.

At around the 16:48 mark, Trey finally stops the lick.  Mike responds with a fury.  At the 17:03 mark, when Trey stops playing for a second, Mike and Fish light the world on fire.  THIS IS SUPER SEXY!  What I would have paid to see that sucker take flight.  Awesome ending to this Ghost!

This Ghost is another tough one to score.  I dig the opening groove which features some great Page playing.  Certain parts at the middle of this version just don’t do it for me.  The ending, though….YES!  I love the last five minutes.  Unique, funky, and strong.  Good enough for a good score.