It takes Ghost four shows after Halloween to emerge out of the a massive set opening AC/DC Bag.  A small segue from AC/DC Bag has been included.

Out of an ambient ending to an extended AC/DC Bag, Trey begins the loops that will bring Ghost.  Mike comes through with his bass line at about the 1:15 mark, to much applause.  The tempo is just a touch more upbeat than the previous recent versions.

The solo section continues the trend of being an extension of the intro.  Page and Mike are pretty relaxed and just groove along.  An average length pause and another rough drop in.  The intro section is pretty standard with nothing that really pops out. 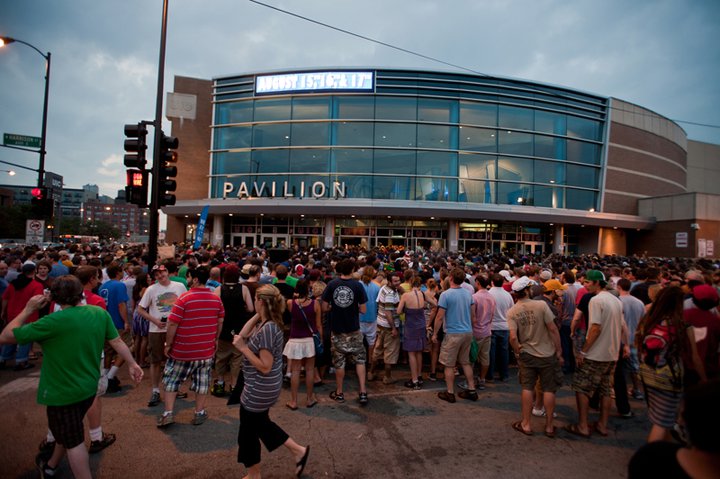 Trey exudes himself more than usual at the start of the jam.  Gordon lays down a rich bass sound while Fish starts to section off the first few measures.  Page’s weapon of choice is the piano and Fish plays an easy smooth beat.

The band settles into a nice groove pocket right away.  Trey leads out in front but he is certainly not overbearing.  He just plays wonderfully in the space he has found.  At 5:43, Trey does something that I love.  In the middle of this smooth groove he starts to create some tension.  Nothing crazy, nothing overpowering, just a touch.  He then lets it go and the groove becomes much more powerful, and packs a real punch.

When Trey creates and releases that tension, he allows my ears to take in Page and Mike as well.  The two move up and down the scales and drop notes all over the place.  Then when Trey releases the tension at 6:04, Gordon’s bass just sounds so massive.  I love this.  Trey follows with some gorgeous notes before revisiting the tension lick.

Page start to get into the organ a bit and at 7:11 begins to play both the organ and piano.  At the 7:30 mark, Mike begins to add tension of his own. You can start to feel things changing.

Fishman starts to ramp things up at the 7:57 mark, and the jam starts to build.  Trey starts to play a higher pitched tone.  Page is running all over his piano at the beginning of this build.  I imagine him running up and down the keyboard from “Big”, just laughing and having a great time.  He then starts to vary things from chord progression, to a bunch of different runs.

Mike is all over the place as well.  As he so often does during these build sections, Cactus is providing a backbone for the band to build. Suddenly he rocks out.  Fishman holds things down during this section, allowing everyone else their freedom.

At the the 10:00 mark, Trey starts to repeat a high pitched lick and Fish immediately jumps on it.  Fish picks up the pace considerably and things really start moving.  Page bangs home some power chords, while Mike runs up and down his bass.

At 10:43, Trey rips a roaring solo but for only a few notes.  He instead backs off the throttle.  He reverts back to almost the style of playing he had in the beginning of this jam, just at a faster pace.  Fish continues to push the pace throughout this section but never seems to get the response he was looking for, in my opinion.  He really drives things and you can see the disconnect at the very end.

At 11:41 Trey starts to back off a bit, Fish answers him with a major fill and

then a very quick beat.  I feel Fish was trying to push this jam to peak a bit harder, but the rest of the band seemed to have other ideas.  Trey lets a note echo into the arena, Mike plays just a few notes, and Page sprinkles in his piano very lightly.  Eventually, Fish complies and moves to the outro with the rest of the band.

I have to say moving to the outro was the right call! The band finds some great ambient space for which to create.  Trey plays some softer, higher pitched, delicate solos.  Very complex and spell binding.  Fish uses an assortment of different sounds.  Page and Mike provide just the right amount of notes to make this delicate balance work.

What is even cooler about this outro is at the 13:53 a little mini “While My Guitar Gently Weeps” jam breaks out.  The entire band flows beautifully into it.  Awesome.  One of my favorite Ghost outros.  It also foreshadows the encore later in this show.

This Ghost does some things very well, and some other things it misses the bell a bit.  The groove section has really interesting parts and the outro is absolutely awesome.  I could listen to the last 3 minutes all day.  As an overall Ghost however, I just feel some parts are a bit disjointed and it never finds it’s full potential.  The peak could have been so much more, and other than the outro, no other part really blows me away.  Another tough one to judge.