After some feedback during “Simple”, Trey explains how the feedback can sometimes be “The Ghost in the Machine”.  Some funny stuff from Trey as he rambles on.  Then Fish has a crazy evil laugh.  Ghost is at the beginning part of the second set and I have included that banter.  This is the last Ghost of 1997.

A bit of a rough start leads to a super slow pace.  Trey laughs a bit at the beginning.  Things fall into place, and the intro gets super soft.  Gordon kicks it the ass a bit before the solo.  The solo from Page is cool, he gets funky with a bit of jazz.  A long pause, and *sigh* another botched drop in.   After a very good intro at Albany, this one takes a step back. 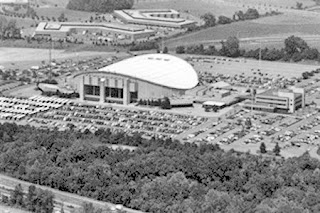 The jam starts out very swanky.  It quickly moves downward when Mike moves to a super deep, massive bass tone at the 5:56 mark.  At 6:15 the jam moves way, way down.  Trey plays some whale calls starting at 6:24.  The whale calls have a long way to travel through the murk that Gordon is infusing into this jam.  The loops echo back and forth really adding a tremendous layer to his jam.

An extremely minimalist jam going down in this section.  Fish is holding a super slow pace.  At the 7:05 mark Cactus finds that phenomenal Frampton like talk box sound that we saw at Cleveland (TDG 25).  I love, love, love this tone from Mike.  It is like stepping through mud and almost loosing your shoe in it.

The loops just keep coming, and Trey is soloing every so slightly.  Fish and Page do a great job of balancing things out.  I like this beginning jam section. OK, who am I kidding?  I like almost every Ghost section…

At 7:47, Trey finds a breathtaking tone.  He integrates it every so smoothly, as it rings out loud and clear.  Trey then backs down into more of his funk tone.  Phish explores a bit before finding a direction.  Page gives them that direction…

At 8:43, Page’s grand piano comes up from the depths of this jam.  It is amazing to me that, no matter how many times (even in the same jam) I hear the piano, my entire body gets excited.  I know things are going to move to an amazing place.

Page works things in slowly then starts to become more pronounced.  Trey is building tension in a laid back sort of way.  Page knocks this out of the park.  It is impossible for me not to close my eyes and drift away.

At 9:32 Fish lets out the tension with a very easy going fill.  Page comes through and drops some of the most beautiful notes my ears have heard.  Not to be outdone at 9:45 Trey plays one of my favorite licks.  It is only two seconds or so, but wow is it gorgeous combined with Page’s piano.  Trey continues to play beautifully and Page’s piano with Mike and Fish locking down the beat is amazing.  The interplay between Trey and Page is what makes this section top notch.

I get down to the funk and dance like a madman.  I love a good dirty spaced

out section in Ghost.  I rage the peaks, and the face melters, as much as anyone else.  However, nothing makes me feel quite like a beautiful Ghost bliss section.  This section is what it is all about for me.

At 10:26 the jam breaks all way down after Trey plays a lick that looks like they might latch onto.  Mike drops some bass over the emptiness and it almost sounds like his bass line in the Ghost intro section.  Instead of going either of those routes, Fish picks the path.  At 10:50 he starts to kick the disco beat a bit.  Trey is right on point with him and starts to pick things up.  This beat certainly has a Lakewood (TDG #12) feel to it, though not as pronounced.

This jam is starting to pick up, although things are still very spacey.  Some crazy feedback is circulating from Page, while Mike is giving some minimalist bass.  Mike is allowing Trey and Fish to run this show.  At 11:55, Page moves back to the piano and all is right with the world.  The Chairmen’s blissful piano with the disco build form Trey and Fish is fantastic.  Texture is very important and this is a great example.  The high speed playing from Trey and Fish against the blissful piano and the slower bass is amazing.  It is a smorgasbord for the ear.

The first 14 minutes of this Ghost are really freaking good!

At 13:26 things get very dark for a second and then start to build toward a peak.  Then, things break down again…Not sure what to think of this….

At 14:24 they start to noodle around and are searching for a path to take.  This part bums me out big time.  All the great energy they built from the first 13 min is lost.  I hate to say it, but they are basically just making noise from 14:24-15:30.  Zero flow, and nothing that excites me.

Why couldn’t they have extended the bliss section or moved within the disco build.  At 15:30, Page moves back to the piano and tries to give the jam a direction.  He plays a very simple beat trying to give the band space and a path to move on.

At 16:08, Fish and Trey try to build to a peak but it just seems forced.  This is the opposite of locked in.  It is pretty ugly and at 16:49 the band scraps it completely and stops the bleeding on a dime.  What the hell just happened? That was a train wreck.

Man, talk about difficult Ghosts to score!!!  I absolutely love the first 14 minutes of this Ghost.  The banter is super fun, the jam has cool murky sounds, a beautiful blissful section, and an awesome disco build.  Had this Ghost ended either building from that disco energy or possibly going deep into a murky outro this Ghost could have been one of my favorites.  Instead the last two and a half minutes are a mess.  The peak (I guess if that is what you want to call it) is forced and it ends badly.  A damn shame.