We skip one show after the fantastic version at Phoenix.  This Ghost moves back into the show opener role at Shoreline.  Today’s clip include a segue into an average Ya Mar.

A good strong start leads to a slow paced intro.  Patience is the name of the game!  The band has complete confidence from the opening note.  The Page solo has him getting funky, with Gordon laying some slaps to compliment him.  An average length pause and the drop in is a bit better than most Ghosts.  (That is not saying much)  The vocals are less over sung in this version that most of the others.

Page starts to take things in a crunchy direction from the beginning of the jam.  They start to section things off (much like they did in a couple of versions in Europe) for the first thirty seconds.  Gordon really uses this as an opportunity to grab a hold of the jam and set the tone.  Trey pulls out his crunchy tone to start but decides to move more toward a more blissful tone. 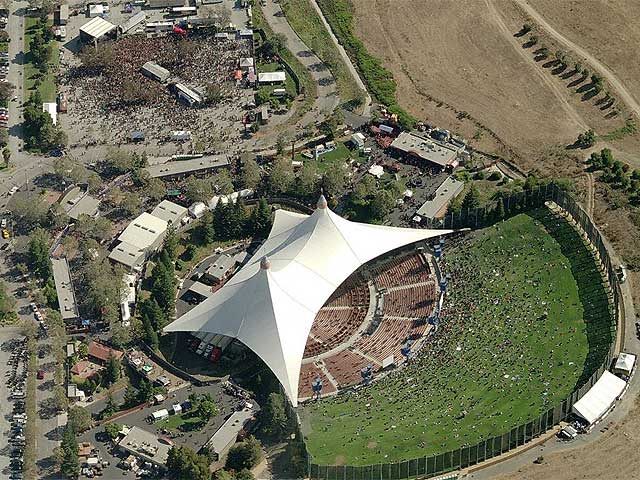 Immediately, a fantastic groove is established by the 3:30 mark.  Nobody is in a hurry to do anything except let the music flow.  Gordon is the star here for me!  He is laying down the beat while taking the lead with little effort.  Trey plays some great notes around the space that has been created for him.    I love to groove, and they find a fantastic one right at the beginning of this jam.

At about 4:57 Fish picks the pace up every so slightly.  Quickly rewind back to the about the 3:15 mark or so, and you can see just how much the pace has moved.  The beauty of it, is that when I just let it play, I barely feel like he has kicked it up at all.  Tremendous stuff from Fishman!  This slight movement allows the jam to build some steam, while still keeping that great groove that has been established.  Trey and Mike are still doing a great job playing off of each other.  Nothing really over the top or dynamite from Page, but his crunchy clav certainly helps the groove out.

At 6:20 Trey plays a quick funk lick and it seems like we are heading down that familiar road.  Instead, at 6:30 we move back towards the groove with Trey exploding a couple of notes.  Gordon at the 7:00 mark starts to play a lot of notes.  Trey uses that as a launching pad and he rips into a solo, then starts letting his notes ring.  Page takes this opportunity to move to the piano and assert himself.  As each Trey note reverberates, Page and Gordon are there to play through it.

At 7:56 Trey starts to chug-a-lug a bit.  He begins building things up at 8:05 and it looks like things are going to explode, but he misses the note.  Gordon responds by repeating a note over and over and sends the band into some space.  Page hits some evil piano chords, and Fish moves to all cymbal work, to create the effect even more.  At 8:55 Gordon moves to the front of the maze and we are left to explore this world.

At 9:08 Cactus takes over.  He starts playing as many notes as you will ever hear

him play.  At 9:25 he just lays into a sick bass line that forces the band to build around him.  Trey starts to play right with him and Fish gets on the train as well.  It is only about 45 seconds or so before Trey fully jumps on to Gordon’s coattails, but brilliant stuff from Mike.

At 10:10 with Fish really crushing things, Trey rips into full solo mode.  Page moves into the piano and things are really cooking.  At 10:40 Trey lets a note ring out and Gordon jumps into a SMOKING bass line.  Trey jumps all over it and the two of them feed the fire.  Page and Fish jump in and this lick carries the jam.  Fire and beauty at the same time as the entire band embraces this Gordon created masterpiece.  It seems like they are going to stop several times, but they just keep going!

Finally at 11:32 Trey starts to move away, and Gordon and Page continue to play the lick for a couple more measures.  Eventually, they move with Trey.  At 11:47 Page plays a couple beautiful sequences on piano before the jam finally fades out.

Another solid Ghost effort.  Good solid movement forward throughout the jam.  Highlights for me are the opening smooooth groove and the cool build at the end.  For the second straight version I have been blown away by Mike’s playing.  He was clearly the star for me in this version.  It is solid from start to finish, just lacks some of the amazing sections the top Ghosts have.