After the forgettable year of Ghosts in 2011, 2012 comes back strong.  I had my worries about Ghost, but they were quickly washed away that beautiful first night at DCU.  The band put away any lingering doubts from the NYE 2011 run, with the incredible second set of night one.  The band ventured out and took risks when starting the second set, and the rewards were plenty.  All of the awesome Boogie On Reggae Woman, and If I Could have been included in the clip.

One of the cooler and spacier intro sections gets this Ghost started.  After an outstanding Carini->Taste to open the set, this Ghost emerges from cool ambiance.  Seeing it live I was certain it was Twist that was starting up.  Phish From the Road tweeted it as Twist for a second as well.  The intro is unique and welcomed.

Page provides an ambient soundtrack as Trey works his opening lick to Ghost in slowly.  It grows stronger and stronger as Page takes things further into space.  Fantastic contrast.  At about the 1:00 mark, Trey starts to get the Ghost lick going at full speed.

At 1:12, Mike drops the bass and Page queues the Rage Siren.  So freaking sweet.  The jam stays slow and patient, then Page gets funky on the clav at 1:30.  This is as good an intro as there is.

The lyrics and pace stay slow and slanky.  It feels as though the band is creeping around.  I love it.  It just FEELS like Ghost.

The solo section continues the nice and easy pace.  It feels more like a jazzy groove then most.  Page grooves, and then gets a bit more funky as Mike drops in.  Trey adds some nice funk riffs to round things out.

The lyrics coming back are botched, but the band recovers during the lead in nicely.  The pause gets a lot of notes from the band, and almost gets a jam during it.  That is probably the longest pause of any Ghost.  Cheers to trying new things Phish!

The drop in is pretty bad.  Not “I need to insert a head on collision GIF” bad, but definitely not good.  I am willing to overlook it due to the awesome intro. The Composed Section clocks in at 5:08, making it one of the longest.  Jam time!

As Page starts things on the clav, Trey finds a cool note to ring through the funky murk Page is laying down.  I am loving this already.  Like a good looking woman you don’t know, this is interesting already.

Mike throws down some huge bass notes around, while Fish lays down the beat.  The band has come to jam.  Page moves in some piano at the 5:45 mark and things work around that note from Trey even more.

Magic from Page.  He plays an incredible blissful, yet extremely funky group of melodies.  Some of my favorite stuff ever from Page.  It is incredible.  Yet again proving why he is my favorite musician on any planet that I am aware of.  Gordon responds INCREDIBLY.  His bass completely amplifies the heavenly rhythms from Page’s piano.  Trey injects a couple light funk licks doing a great job of letting Page rock it while he has it.

6:06-6:36 from Page makes me think that the wheel was not mankind’s greatest invention.  Rather, it was putting Page behind a Yamaha C7 concert grand piano.

My shot from N2 of DCU

As if Page making me think he is from another planet wasn’t enough, the band locks in and works an incredible change.  We go from incredible bliss by Page, to a Page-Trey funk hand off.  Trey begins inserting a funk lick at 6:21, and works it nice and slowly into the bliss.  Page works around it and lets Trey move forward and change this to a dance party.

Mike throws down a sick lick at 6:45 and it gets things rocking.  Mike and Trey grow in power.  As things start to get real funky, Trey starts to play some different notes.

Fish drops a fill at 7:19, and then Trey throws some power chords into the mix.  These giant chords leave a ton of open space and plenty of direction for another groove to take place.  Which of course, is exactly what happens.

Wow, I can’t believe all that took place in just over two and a half minutes.  There is a lot of awesome stuff going on there, and that is one of my favorite opening jam sections.

As Trey lets those notes ring out, Mike comes down with some serious bass. Mike drives the jam into a different direction.  Trey lets out some soloing notes around the 8:13 mark, as Mike blasts away around them.

At 8:30, Trey increases his pitch, and Page switches to the piano and this jam starts to build.  Mike continues to do some serious work shooting high power bass bombs into the fold.

At 8:55, Trey begins to build some tension and then instead of unleashing a fury… We go a different direction…

Trey plays a truly gorgeous lick at 9:12.  He really starts to build some tension before Mike just come crushing behind him.

This Ghost is all over the place.  Grooves, bliss, bass bombs, tension…They are seriously taking chances.

Trey starts to solo around the 10:15 mark, and Page works some piano in 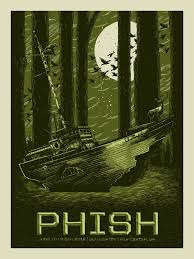 around him.  Things start to lack a direction  here.  Page tries to deliver a path with the organ, but it takes a while for things to develop.

Things meander a bit here, and this by far the weakest segment of this Ghost.  It is not horrible but it doesn’t click the way the other segments do.  I applaud the big risks they are taking here, being that it is the first show of the tour.  It just doesn’t do a whole bunch for me.

At 12:13, Trey starts to repeat a lick that sends the jam downward.  This section in itself is not the best, but boy does it set up our final section…

Out from the bottom, Fishman starts to produce some fantastic work.  He gives the jam the direction and steam it needs.  Things grow and grow.  Second by second you can feel the happiness growing.

At 13:20, Page drops another incredible melody and the murk around fades away.  As the darkness fades away him at 13:35, Page, and and then Trey’s lick is just beautiful.

Page continues to work some awesome melodies in.  Trey gets a touch anxious but then backs off, and gives the band plenty of space.

The result?  Page just kills it.  At 14:20, Page guides us into a new place we have yet to visit.  I feel like I am sipping on an Arnold Palmer, lounging by the beach on Jupiter.  So cool.

While Page provides my Jupiter soundtrack, Mike takes control of our next path.  He drops some serious BEOWS and guides us into one of the best versions of Boogie On Reggae Woman ever.

One of my personal favorites for what it meant to the fanbase at the time.  I remember many people not buying tickets to shows and reading quite a bit of negative criticism about the band after the NYE 2011 run.  The first night in DCU, changed that in one 45 min set 2 opening run.  This Ghost may not be Denver ’97, but it takes an incredible amount of risks and goes all over the place.  No peak, but some outstanding type 2 improv.  The beginning and ending sections of this Ghost are outstanding.